I was one of six dozen work colleagues who biked 100 miles last weekend for charity.

I was the only one who rode the “century” on a Citibike.

My decision to use New York City’s bike share program amused my colleagues, but it seemed sensible to me.

Citibikes offer numerous advantages. The bikes are nearly indestructible. The seats are comfy and they have a basket in the front to carry your gear.  I have an annual membership.

Moreover, if you find yourself in a tight spot somewhere because of inclement weather or a flat tire you can dock the bike and call an Uber or take the subway home.

Of course there are some pretty big limitations. The bikes are heavy and they have to be docked and exchanged every 40 minutes or you incur fees.

A snapshot of my Citibike stats show how I met that challenge, effectively transforming a 100-mile trek into dozens of bite-sized rides as I changed bikes every 25 minutes or so.

That can slow you down.

So if you are looking for speed, Citibike wouldn’t be your first choice.

Another limitation is the range. While docking stations are plentiful in Manhattan, they extend only as far as Bushwick, effectively putting rides to Coney Island or Rockaway Beach out of bounds.

We were given three days to accumulate the 100 miles. I managed to wrack up 35 miles on Friday with three rides, including one down the Hudson River Greenway late at night. On Saturday I rode to Prospect Park and around Crown Heights to bring my total to 65.

For the final day my plan was to ride south on Broadway, cross the Brooklyn Bridge and through Brooklyn Heights, Cobble Hill and Carol Gardens to Red Hook. I would swing back along the waterfront to the Manhattan Bridge.

I was riding with Andrew, a friend from high school. We started early, but still couldn’t believe the emptiness of Mid-town caused by the coronavirus.

In my lifetime I’ve never seen Broadway, or 42nd Street or Time Square so empty and it may never happen again. 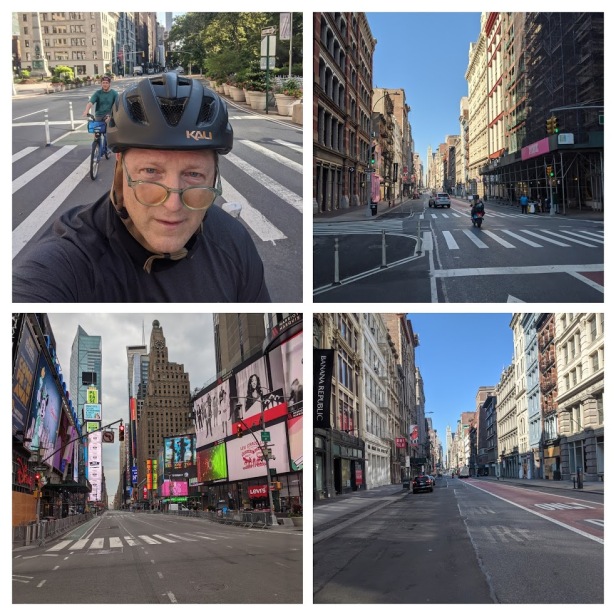 We crossed the Brooklyn Bridge at about 9 a.m. It was relatively empty because there are no tourists. Typically crossing the bridge during the summer is almost impossible.

We rode down Henry Street through Brooklyn Heights with its fancy townhouses and paused for a drink in Cobble Hill Park, which is a lovely spot nestled between Congress Street and Verandah Place.

It looks like the kind of small neighborhood park you find in London or Philadelphia.

But the prices of real estate there are decidedly New York: A house that needed work facing the park was on the market for $4.2 million.

The surprise for me was  Caroll Gardens. The row houses were expansive and set well back from the street. Many had meticulously planted gardens in front. It’s hard to believe its that close to Manhattan.

A surprising number of houses had Virgin of Mary statutes in the front yard. Some flew the American flag. The place feels like an isolated alcove. It could be a small town anywhere. 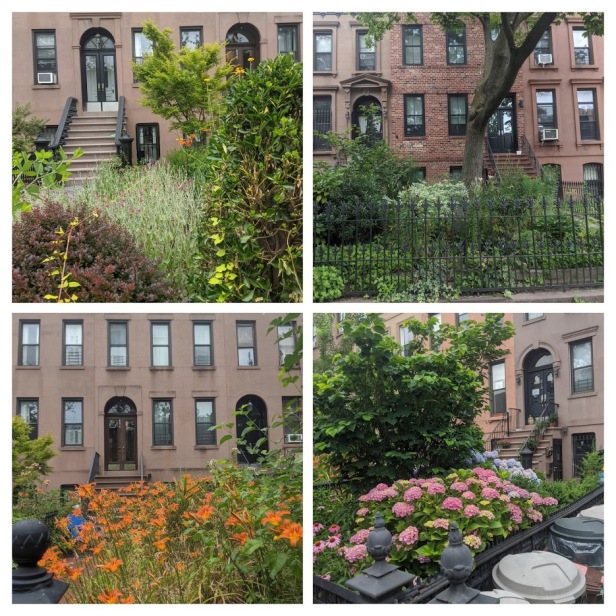 The area is also well know for the elaborate and, in many cases, original, wrought iron gates that stand in front of the houses.

Caroll Gardens also has some awesome small shops. We stopped at Black Gold, which serves drip coffee and sells vinyl records. The music was playing from a classic turntable.

We rode down the hill and crossed into Red Hook to explore the waterfront. From the pier at Louis Valentino, Jr. park we had an amazing view of both the Verrazzano Bridge to the left and Manhattan on the right.

In the water there were a dozen people on paddle boards and kayaks. I had no idea there was a boat launch here.

We headed back along the water front, riding through Brooklyn Bridge Park and over to Vinegar Hill before we crossed the Manhattan Bridge. From there we biked north through Chinatown and the Lower East Side.

We paused for lunch at Freeman’s, which was offering outdoor dining in an alley and then headed north to Harlem.

We had covered a huge swath of the city and passed through scores of neighborhoods that despite their proximity bore almost no relation one to the next.

I finished exhausted and with a total of 101 miles, one more than I needed.