Hamilton Heights is named for Alexander Hamilton, who bought a 32-acre farm in the area and built an estate called “The Grange.”

The Park Service rangers who run the property told me that  no one used to visit. But all that changed on a single day, Jan. 20, 2015, when the musical Hamilton debuted.

Since then, its been mobbed.

I spent a recent afternoon biking near the Grange as part of one of my weekend trips during the pandemic. I pick a neighborhood and ride all the streets, soaking up the culture and history.

Hamilton Heights is mainly Dominican, though you can see lots of signs of gentrification in the form of yoga and sushi and coffee shops like the Chipped Cup.

There are also a growing number of students from Columbia and City College wandering around the neighborhood. The townhouses on Convent Avenue are spectacular and now fetch $3 million. A real estate agent told me the star of the Marvelous Mrs. Maisel just bought one.

The Grange was closed, of course, but I’ve been inside before.

Hamilton obviously thought a lot about the design. One nice touch:  floor-to-ceiling windows in the parlor that you can open and you step through to the porch. Evidently, it got around a tax being levied on doors.

He also had a silver set given to him by George Washington displayed prominently in the octagonal dining room and a fabulous writing desk in a room painted bright green. The dinner parties would have been amazing.

The tragedy of his early death at 47 hangs over the house.

Hamilton, after putting so much effort and thought into the construction of the only home he ever owned, only enjoyed it for two years.

As everyone knows, Hamilton was killed in 1804 in an illegal duel with Aaron Burr.

Burr was, at the time, the sitting Vice President of the United States, which seems insane. The tangled ties between Hamilton and Burr could occupy pages. They were business and political adversaries.

Burr even represented Hamilton’s mistress, Maria Reynolds, in her divorce from her husband. That affair ruined Hamilton’s hope for higher political office.

Jumel owned a mansion further uptown that was used both by George Washington and the British as a military headquarters during the Revolutionary War.

The house, a little visited museum in an area called Washington Heights, is definitely worth the trip.

You can see the small room where Washington slept  during the war and stand in the dinning room where, in 1790, he hosted a dinner party for his wife Martha, Vice President John Adams and his wife Abigail, Secretary of State Thomas Jefferson and Hamilton, then Secretary of the Treasury and his wife Eliza.

The party reminds you of how small and interconnected the world can be.

But Washington Heights is for another story. 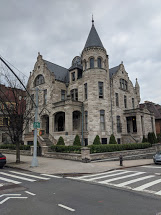